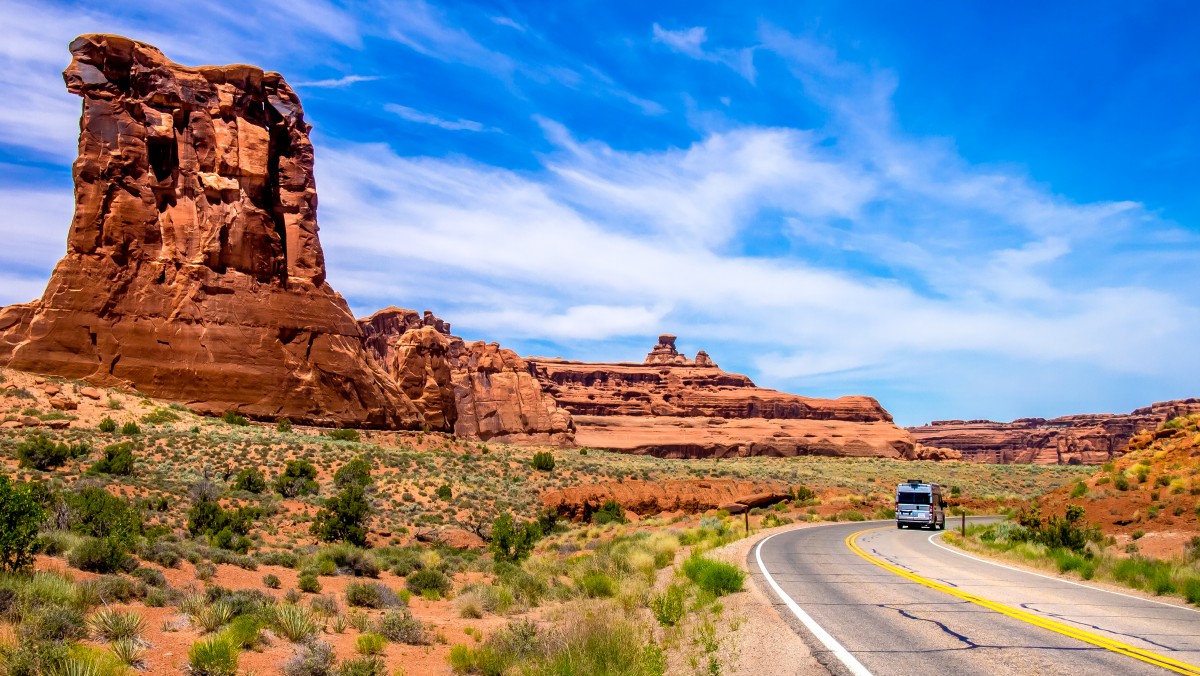 Whether you live in America or halfway across the world, just about every self-proclaimed traveller has dreamt about driving across the country as part of a great American road trip. After all, the U.S. is an absolutely huge place, and the fact that you can reach every inch of it by car, without any sort of roadblock, is incredibly appealing. Road trips are the perfect option for those looking for an affordable and adventurous holiday, but only if you plan them really well. Keeping that in mind, here are four things you should do to make your great American road trip truly great.

Whether you like it or not, most road trips do come with a time limit, so it’s vital that you have a route and rough schedule planned before you hit the road. There are a number of incredible American road trips you could consider, but, if none of those appeals to you, then you could always use a road trip planner to create one of your very own. Just make sure that you’re not driving too much each day, as this is dangerous and could also ruin the experience for you.

When you’re travelling long distances in your car, it’s more important than ever that you take proper care of it. With that in mind, you should make sure that you have your car inspected by a mechanic at least a week before you set off. You should also pack your car with tools, a spare tire, a brake bleeding kit, a tire pump, and more, and learn how to complete basic repairs and maintenance. This way, you will be able to help yourself if and when there’s an issue on the road.

Although you could head off on your own, road trips tend to be a lot more fun when you take friends or family with you. That being said, this is only true when you choose the right companions. You’re going to be stuck together in a car for hours at a time, so it’s vital that you bring people that you really get along with. Unless you really love driving, you should also make sure that whoever you bring is willing to share the wheel time with you.

Road trips can be incredibly affordable and budget-friendly, but this is only true when you spend time planning your budget and manage your money wisely. With gas, toll costs, food, souvenirs, attractions, and more, road trips can get incredibly costly very quickly. To avoid this, you need to consider all possible road trip costs and decide how much money you’re going to spend on each one. You should also have an emergency stash of cash for any unexpected expenses.

Heading off on a great American road trip is a dream for most avid travellers, but this dream can quickly turn nightmarish if you’re not prepared. To ensure you have an amazing time, make sure you remember the advice above.

After camping in the beautiful mountains and national forests along the Blue Ridge Park (Blue Ridge Parkway , Great Smoky Mountains National Park) we were in search of some heat and sun. We Looked at the map, in search of our new destination that wouldn’t take us too far off the direction towards New Orleans. We found St. George Island, located off Florida’s gulf coast, perfect! We headed to St. George Island State Park to set up camp, the busiest camping site we had encountered so far on our trip. While it was a little warmer, the sun remained behind the clouds for our trip,but we could still enjoy the beauty of this island, after all, it ranks as one of the top beaches in the US!

Over the Christmas/New Year holiday period we decided to drive to New Orleans for New Years Eve. We left New York City, five days before Christmas heading south. The only ‘plans’ and accommodation we had wasn’t until the 30th, so we could enjoy the drive and see where we would end up! Looking at the map of the USA, I also decided that I would love to visit the Great Smoky Mountains National Park on the way down. So we headed for the Blue Ridge Parkway.

The Blue Ridge Parkway is an absolute dream, the scenery is breathtaking.  It is America’s longest linear park, stretching 469 miles, connecting the Great Smoky Mountains National Park and the Shenandoah National Park. Located in the States of North Carolina and Virginia. Parts of the Appalachian mountains are also included in the parkway.  The Blue Ridge Parkway is a nature lovers dream, rich in biodiversity. There is so much variance in the fauna, flora, climate and geological features.

Before we left NYC, we had decided that we would rather camp in various National forest or State forest camping grounds, so the trip could remain relatively unplanned and be more cost effective. So the first area that we stayed at, was Peaks of Otter,  now being that this was in the middle of December and we did not do any research, the visitor center and camping area is actually closed at this time of year! It was raining and getting late, and as our car is set up for sleeping in ect we still stayed near the visitors center. The next morning we woke up to a blanket of fog, I felt that the thick fog enhanced the beauty. Peaks of Otter surrounds the Jefferson National Forest, and provides breathtaking views. You can take multiple hiking trails near the visitor center. Due to the fog being so thick, we decided to hike the shortest route, the elk run loop. This hike offers a self guided ecology walk, with displays along the walk describing the forest community, very cool.

Next stop along the parkway, the Head Foremost Mountain overlook and the Arnold Valley Overlook.

The fog had still not cleared up by lunch time! I can only imagine how spectacular these views are on a clear spring or summers day.

For our second night, we camped at Curtis creek, a camping ground nestled in the mountains at the base of the Blue Ridge mountains. This campsite was open (Closes December 31st) and works on a first come, first serve system.  Near the camp ground, there are multiple hiking trails on offer, plus the pretty creek.

After hiking during the morning at curtis creek, we drove to Asheville, N.C to spend the day there ( a separate blog post). After Asheville, we continued the journey towards the Great Smoky Mountains National Park. This time, camping in the Gorgeous Nantahala National Forest. Nantahala is Cherokee for “land of the noonday sun” a very fitting name for this beautiful forest. The forest is half a million acres of pristine woodlands. A true beauty to explore. Our campsite for the night was located at Lake Santeetlah, a mountain lake surrounded by the Nantahala National Forest. A really pretty and relaxing place to camp.

One of my major loves of the USA is the National Parks system. As a nature lover, and with a background in Wildlife Biology and Conservation, I am in awe of all of the National Parks that I have had the chance to visit, and the system that protects them. On our drive to the south, I had to make sure that we did not miss the Great Smoky Mountains, the most visited US National Park. I do hold the National Parks pass, however the Smoky Mountains don’t require an entrance fee, one of the few parks that don’t! The Smoky Mountains is part of the Blue Ridge Mountains, a division of the larger Appalachian chain. These Mountains border between North Carolina and Tennessee and is one of the largest protected areas in eastern US. They are also acknowledged as an UNESCO world heritage site, very impressive. With its beauty and diverse range of plant and animal life, it is no wonder that the Great Smoky Mountains is a popular place to visit and explore.

As we visited during winter, parts of the park was closed, I would love to go back during the spring and/or summer to explore more of this gorgeous place.

The natural beauty of Bryce Canyon National park is incredible. The views from above and from within are truly breathtaking. The major attraction is the spectacular crimson colored hoodoos, pillars of rock created by erosion. Bryce Canyon has the largest collection of hoodoos in the world, attracting nearly two million visitors annually. Bryce Canyon is located in southern Utah, in Utah’s canyon country. A four-hour drive from the famous Las Vegas, Nevada and two hours from the beautiful Zion National Park.

The main attraction is of course, the gorgeous collection of hoodoos. The best place to view the hoodoos are from the Bryce amphitheater, which has the largest collection of viewpoints.  With four main viewpoints (Bryce point, inspiration point, sunset point and sunrise point) and access to numerous hiking trails, this is the perfect area to start a journey exploring Bryce Canyon.

Bryce Canyon has a range of hiking trails from easy to strenuous. As an introduction to Bryce canyon, I would recommend beginning with the Rim trail hike, here you will be hiking the rim of Bryce amphitheater, viewing the gorgeous hoodoos from above, walking between sunrise and sunset point. Rim trail is classified as easy. Please note that the rim trail is not a loop, so the hike can range from 1 to 8 hours, depending on when you turn back around!

A step up from the Rim trail hike, would be the Queens/Navajo combination loop, this is classified as moderate and is also regarded as the most popular hiking trail. Highlights will include viewing Thor’s hammer and the two bridges. If you are looking for more strenuous hikes, I would recommend the Peekaboo loop, here you will hike through the heart of the park, with stunning views of the hoodoos and also viewing the wall of windows. Fairytale loop is another great strenuous hike, providing you with a chance to see the Chinese wall, tower bridge and tall hoodoos. Away from the Bryce amphitheater at the northern end of the park is Mossy cave, an easy hike away from the crowds.

A breathtaking scenic drive through the park. Provides a great opportunity to view some of the major overlooks, with 13 viewpoints along this 38 mile round trip. Highlights include the natural bridge,  Rainbow and Yovimpa points. If you only had one day to explore Bryce canyon, I would recommend completing this loop and stopping off at the major viewpoints.

If you have more than a day I would recommend a visit to Mossy cave. A hidden gem at the northern end of the park. provides an opportunity to get up close with the hoodoos without descending.  It is an easy hike along a stream side to view this pretty cave. Depending on the time of year you may also see a waterfall or icicles in the cave! A peaceful hike without the crowds.

Bryce Canyon is a truly remarkable place. The scenery is stunning and the opportunities for hiking and photography are endless. A true nature lovers playground! Photos don’t do justice, you really need to explore Bryce Canyon in person to surround yourself in this natural beauty. A unique, and breathtaking landscape. One of my favorite national parks that I have visited so far.